The Allt Lorgy river restoration project in the Scottish Highlands, which was designed by RSK company cbec in 2012, has won the 2020 UK River Prize for reach scale at the River Restoration Centre annual conference. cbec was responsible for the investigation and geomorphic design of this major restoration project, which was the first of its kind in Britain.

The Allt Lorgy is a typical upland spate burn that was significantly managed for agricultural purposes in the late 1980s. As a result, it included artificial embankments, rock bank revetments and in-channel boulder grade control. The restoration project aimed to restore the morphology and associated habitats of a 1-km section of the river and its adjoining floodplain by removing artificial constraints. The aim was to re-establish the fundamental physical processes that drive the evolution of the river’s form and the associated benefits for instream, riparian and floodplain ecology.

“As the principal designer we were employed to do the geomorphic design for the site in 2012,” explains cbec Managing Director Hamish Moir. “It was one of the first ‘assisted recovery’ or ‘Stage 0’ projects completed in the UK.

“We took a process-based approach following an assisted recovery philosophy. We tried to remove the constraints to the natural river process by removing embankments and rock bank protection, and implementing large wood structures at appropriate locations to really kick-start the geomorphic process. The sediment that we removed from the embankments had previously been dredged from the river, and we used that to resupply two locations on the site, thus kick-starting the natural sediment transport processes.

“We didn’t know how important this type of project was going to be, but it has turned into a really good case study for how restoration should perhaps be done in these types of river environments.”

This work has now resulted in a self-sustaining system; enhanced lateral channel migration has begun the natural recruitment of riparian trees into the watercourse, which further invigorates the dynamic change. Eight years later, and after several of high-flow events, significant evolution of the site has occurred. In effect, the ‘circle of restoration’ has been closed, thus providing a sustainably evolving river environment. 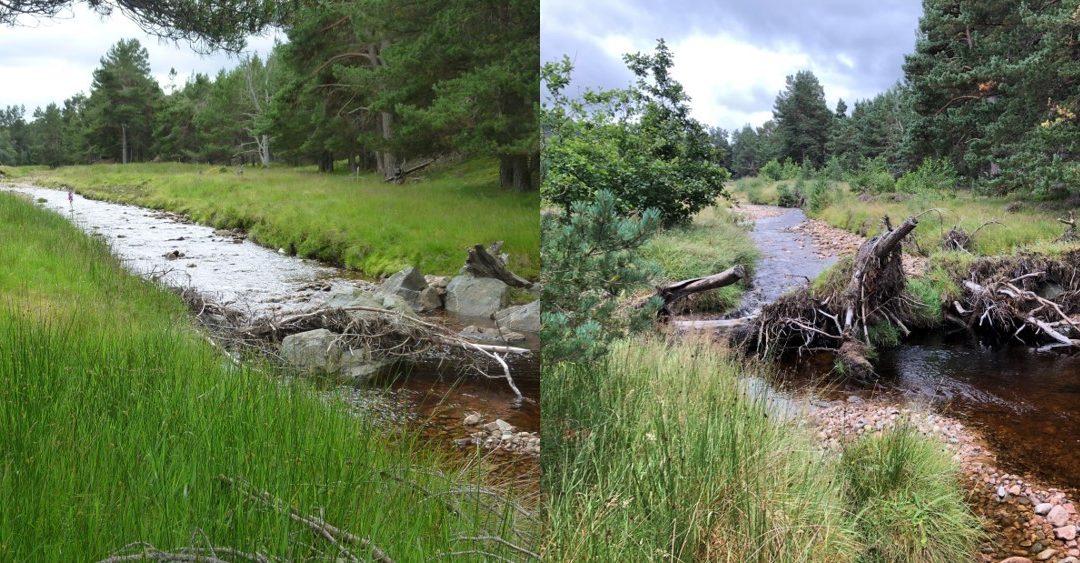 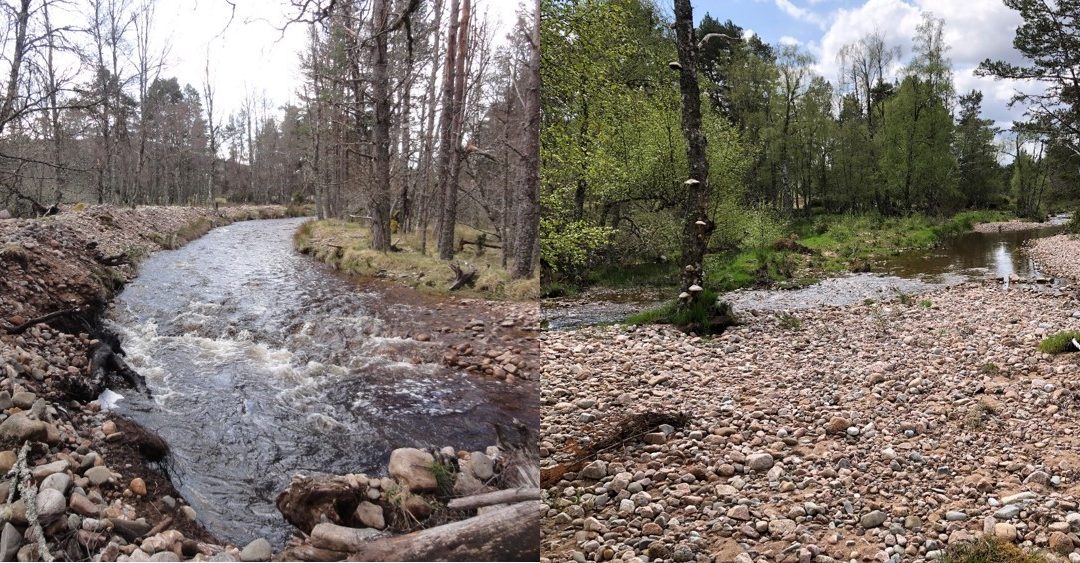 Before and after of the embankment and avulsed braided channels

The UK River Prize celebrates the achievements of individuals and organisations working to improve rivers and catchments, and recognises the benefits to society of having a healthy natural environment. This year’s winner was announced at the River Restoration Centre annual conference on 9 September.

Martin Janes, Managing Director of the River Restoration Centre, commented, “The high standard of entries for this year’s UK River Prize has once again demonstrated the enthusiasm, passion and commitment of local partnerships, charities, volunteers and agencies, in working to restore the freshwater landscape for people and wildlife. On behalf of the judges, it is always a pleasure to read the detail of all the projects, and a real challenge to choose between them. I would like to thank all of this year’s applicants who submitted their excellent projects from across the UK.”

You can view all the 2020 finalists on the River Restoration Centre website.

👏 Grace Kassimoto is the only acoustic specialist from and working in East Africa.

💚 In our latest #ADayInTheLife, she discusses how she is leading the way for women in a traditionally male-dominated industry and what she enjoys most about her role.

Read her story in our bio!

📢 We are proud to sponsor the #GreenEnergyAwards 2022, an event organized by Scottish Renewables

🏆 This ceremony aims to recognise the inspirational organisations, people and projects going above and beyond to make a real difference to the health, wealth, and wellbeing of Scotland

We can't wait to see you there!

Amazing pictures from @crcivils taken on-site at A47 Guyhirn.

📢 We are delighted to welcome ERS, a trusted and experienced economic development consultancy, to the #RSKFamily

👏 ERS is one of the few companies from this sector to have its quality assurance processes independently accredited to ISO 9001.

Tom Peart, Principal Surveyor at @centara_ltd, out on-site in Rotherham.

🐟 Concern was recently raised in France with regards to the health of marine ecosystems.

📌Join RSK France's webinar, in collaboration with law firm Franklin and TechWorks Marine, to discuss the sustainable support of renewable energy in the marine environment.

Register now in our bio!

📢 November is a month dedicated to men’s health.

🌍 On November 19th, we celebrated #InternationalMensDay, a global holiday that highlights the positive value men bring to the world.

🤝 This year, men around RSK are taking part in #Movember, an initiative that involves growing a moustache during November to raise awareness of men’s health issues.

📢 We are delighted to share that ZED, an RSK company, has been involved in producing an energy model and Part L compliance verification for a new sustainable construction project by the hit @BBC show DIY SOS.

👏 DIY SOS is a show centred around helping transform houses across Britain and this project is part of the #ChildrenInNeed 2022 campaign.

😮 “The UK is one of the most nature-depleted countries in the world. Building with Nature can help clients understand how they can utilise best-practice green infrastructure solutions to deliver developments that are better for both people and nature.”

👏 In the November edition of our #employeespotlight, we spoke with Joanne Mayneord, Senior Landscape Architect at @stephensonhalliday, who has recently been certified by Building with Nature as an Approved Assessor.

This website uses cookies to improve your experience while you navigate through the website. Out of these, the cookies that are categorized as necessary are stored on your browser as they are essential for the working of basic functionalities of the website. We also use third-party cookies that help us analyze and understand how you use this website. These cookies will be stored in your browser only with your consent. You also have the option to opt-out of these cookies. But opting out of some of these cookies may affect your browsing experience.
Necessary Always Enabled
Necessary cookies are absolutely essential for the website to function properly. These cookies ensure basic functionalities and security features of the website, anonymously.
Functional
Functional cookies help to perform certain functionalities like sharing the content of the website on social media platforms, collect feedbacks, and other third-party features.
Performance
Performance cookies are used to understand and analyze the key performance indexes of the website which helps in delivering a better user experience for the visitors.
Analytics
Analytical cookies are used to understand how visitors interact with the website. These cookies help provide information on metrics the number of visitors, bounce rate, traffic source, etc.
Advertisement
Advertisement cookies are used to provide visitors with relevant ads and marketing campaigns. These cookies track visitors across websites and collect information to provide customized ads.
Others
Other uncategorized cookies are those that are being analyzed and have not been classified into a category as yet.
SAVE & ACCEPT