A research paper co-authored by RSK Consultant Geophysicist Matthew Bayliff has provided a detailed insight into what is causing the earth’s magnetic north magnetic pole to drift. The wandering of the magnetic north pole, which has moved from Canada towards Siberia in recent years, has long been a topic scientific fascination.

“The north magnetic pole is the area on earth where the magnetic field lines are vertical,” explains Matthew, whose university dissertation formed the basis for the research paper. “This is known to constantly drift. Before 1990, for example, it had a speed of about 0–15 km per year and remained around the Canadian side of the Arctic. However, since 1990, this has accelerated to 50–60 km per year in a direction towards Siberia.”

The movement of the north magnetic pole has direct implications, as many navigation systems, such as smartphones, rely on magnetic field models to operate. The acceleration has thus resulted in the need for more frequent updates of the field models so that they remain accurate.

“When the north magnetic pole’s position was first recorded, a team had to venture into the Arctic and physically locate the point where the field lines were vertical,” says Matthew. “But now, with advancements in satellite technology and a network of ground-based magnetic observatories, accurate field models of the earth’s magnetic field can be produced. This gives an approximate location of the north magnetic pole and a lot more information on the global magnetic field.”

Using these models, the paper outlines what has determined the rapid acceleration in the drift. Two “negative flux lobes” on the core–mantle boundary have been in a tug of war, with the Canadian lobe weakening and the Siberian lobe strengthening, which has led to this acceleration in the drift. It is believed that these changes in the flux lobes on the core–mantle boundary is linked to changes in the flow of molten material within the outer core. But the drift will not stop there. 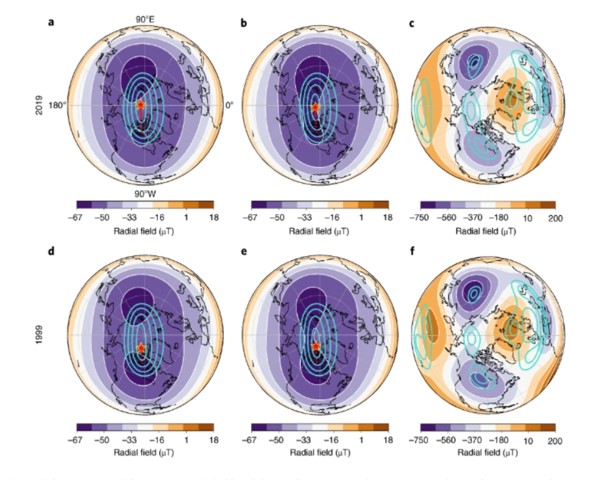 A, B and C are field models from 2019. D, E and F models are from 1990. A, B, D and E are models from the earth’s surface, whereas C and F are from the core–mantle boundary. In 1990, the two large lobes were of about equal size and intensity. However, by 2019 the Siberian lobe was larger and more intense than the Canadian lobe.

This research has shown large-scale variations in the global magnetic field. However, small scale magnetism can also be observed and is influenced by many shallow surface features ranging from unexploded ordnance to buried mineshafts. If you require any magnetic surveys for such features, please contact the RSK geophysics team at mbayliff@rsk.co.uk or +44(0)7741 725908.

You can read the paper in full at Nature Geoscience. BBC has also reported on the findings.

🥳 #RSKgroup company RSK Biocensus is delighted to have been named Large Consultancy of the Year at the 2022 Chartered Institute of Ecology and Environmental Management (CIEEM) Awards.

🏆 The awards aim to celebrate the outstanding work of ecologists and environmental managers who work to protect and enhance the natural environment, and are the highest honour an ecological consultancy can receive.

🤝 The culture of collaboration within MSS teams to solve challenges faced by its clients and business aligns with the aims of RSK, thereby creating a synergistic fit between the two companies that will benefit clients.

Find out more by clicking the link in our bio!

👏 "We Are One Club! A big thank you to all those members of the Charlton family who came together to help launch our 22/23 Castore home kit" - Charlton Athletic Football Club

This website uses cookies to improve your experience while you navigate through the website. Out of these, the cookies that are categorized as necessary are stored on your browser as they are essential for the working of basic functionalities of the website. We also use third-party cookies that help us analyze and understand how you use this website. These cookies will be stored in your browser only with your consent. You also have the option to opt-out of these cookies. But opting out of some of these cookies may affect your browsing experience.
Necessary Always Enabled
Necessary cookies are absolutely essential for the website to function properly. These cookies ensure basic functionalities and security features of the website, anonymously.
Functional
Functional cookies help to perform certain functionalities like sharing the content of the website on social media platforms, collect feedbacks, and other third-party features.
Performance
Performance cookies are used to understand and analyze the key performance indexes of the website which helps in delivering a better user experience for the visitors.
Analytics
Analytical cookies are used to understand how visitors interact with the website. These cookies help provide information on metrics the number of visitors, bounce rate, traffic source, etc.
Advertisement
Advertisement cookies are used to provide visitors with relevant ads and marketing campaigns. These cookies track visitors across websites and collect information to provide customized ads.
Others
Other uncategorized cookies are those that are being analyzed and have not been classified into a category as yet.
SAVE & ACCEPT
Share via
Facebook
Twitter
LinkedIn
Mix
Email
Print
Copy Link
Powered by Social Snap
Copy link
CopyCopied
Powered by Social Snap