It has been widely published in the press that building tens of thousands of homes on flood-prone land is compounding the effects of flooding in the UK. Tory backbenchers called on Boris Johnson to review the government’s housing policy over concerns that new homes were either not flood-proof or were exacerbating issues in neighbouring communities. But are the goalposts on flood risk changing because of climate change?

Following storms Ciara and Dennis, and to some extent Jorge, there were up to 250 flood warnings and alerts across England, from Devon to Cumbria, with a further ten in Wales, following one of the wettest Februarys on record for more than 250 years. With the flood events still affecting people across the country, it is too early to fully assess the effects and their severity. But we do know that many major rivers have reached their highest levels on record, and “unprecedented” is used to describe the event in the media.

These floods occur only months after similarly devastating flooding in Yorkshire and the Midlands. The summer of 2019 also saw more localised, but dramatic, flooding in the Peak District and Lincolnshire.

With the use of social media and easier access to news feeds, it seems that floods are more widely publicised than before. But the winter of 2015–16 saw devastating, record-breaking floods in northwest Britain, with the highest recorded daily rainfall and the highest peak river flows recorded in England. In the winter of 2013–14, sustained flooding affected southern England – most notably the Somerset levels and the Lower Thames. While this event was less exceptional in terms of flood peaks, the duration and extent were remarkable.

Generally, the first two decades of the 21st century have been characterised by many major floods affecting the entire UK. Inevitably, the current floods have prompted widespread discussions about flood risk management and claims that floods are increasing because of climate change.

There are many forms of flooding, but it is fluvial (river) flooding that typically causes the most damage owing to its extent, depth, velocity and duration. With intense rainfall events, pluvial (surface water) flooding inevitable affects more localised areas, but I will focus on river flooding risks.

Although the most recent flooding is still to be fully assessed, a history of peak flows is recorded by the National River Flow Archive (NRFA) from more than 1500 gauging stations at various UK locations. The data held by the NRFA enables assessing live data and analysing the longer-term trends in peak flows. While I have not assessed the data from all available records, for obvious reasons, luckily the NFRA has, and the results indicate the same conclusion. Over the past four or five decades (the length of most typical river-flow records), there has generally been an increase in river flow across most of the UK. More importantly, regarding floods, there have been increases in peak river flows (commonly, studies analyse trends in the “annual maximum” – the highest peak river flow in each year), and floods have become more frequent.

The work is also consistent in terms of the geographical picture. The map below shows trends in annual maximum flow for 346 UK gauging stations. Increases in high river flows (indicated by blue triangles) are most noticeable in the north and west of the UK. There are also significant increases in some other parts of the country, such as southern England and East Anglia. 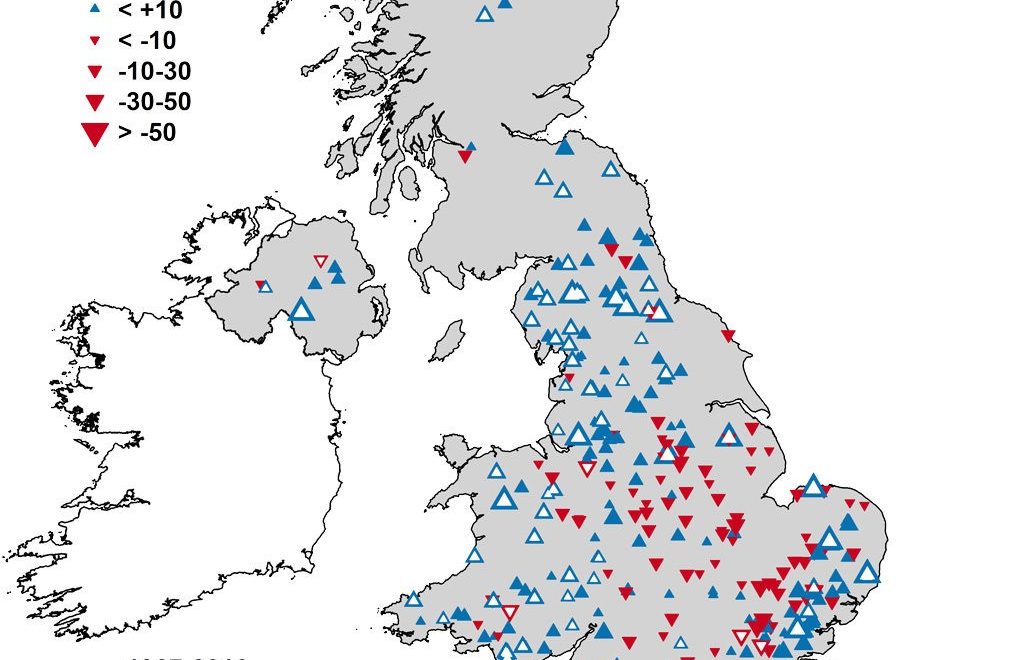 The graphs below are examples of long-term variability in floods in some of the areas affected in 2019–20. The rivers Don, Calder and Eden, with records going back to the 1960s and 1970s, show increasing trends, with recent floods, in 2007 and 2015–16, standing out. Importantly, the graphs show trends in annual peak flows using data up to 2017, and do not include the 2019–20 floods. Early estimates, however, suggest the recent peaks will further reinforce these trends.

However, the record from the River Severn – a rare example of a record extending to the 1920s – portrays a different story.

Although the graphs indicate a weak increase since the 1960s, they reveal more extensive flooding in the pre-1960s period. The record reveals a weak downward trend, albeit with the most prominent feature being notable variability between years and decades, with more flood-rich periods in the early 2000s contrasting with flood-poor periods, such as in the early 1970s. 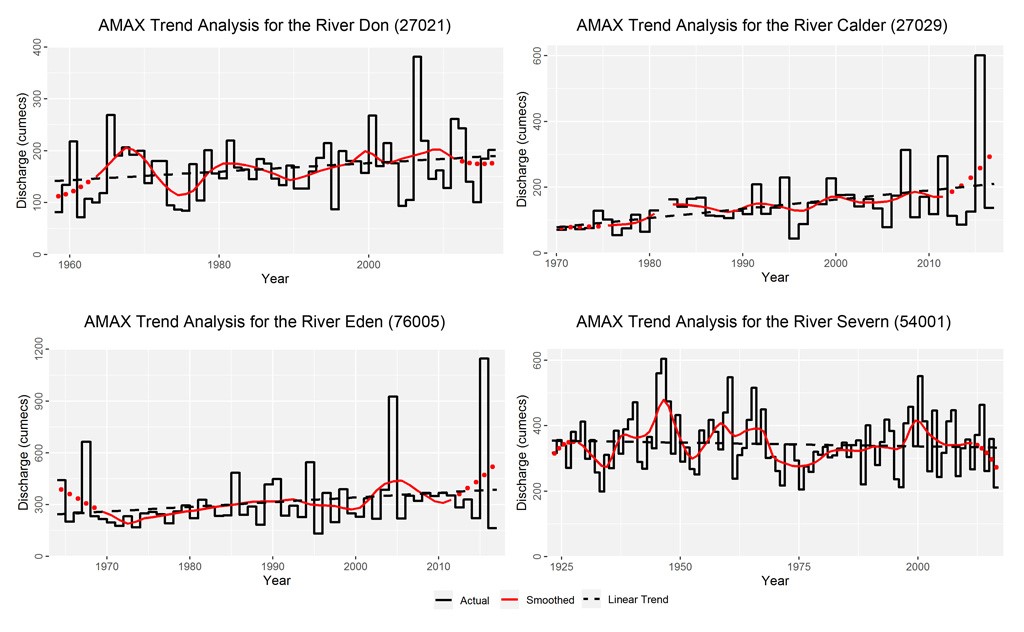 Acknowledgement: Data from the UK National River Flow Archive. A time series of annual maximum flow (“AMAX”) for four selected rivers in areas affected by flooding in 2019–2020. The black dashed line shows a linear trend; the red line shows a smoothing filter, which emphasises the variability between decades.

In principle, there is a fundamental link between climate change and flooding. A warmer atmosphere retains more moisture. Correspondingly, climate change projections suggest future increases in flood severity are likely for the UK. But are we seeing an impact of climate change in the increased flood trends we have witnessed over recent decades?

Research in the UK, using historical flood records, such as for the Severn, points to pronounced variability between decades, leading to flood-rich and flood-poor periods that are driven by several factors. These variations make it difficult to interpret trends, so we cannot say with confidence how much of the observed increase in flooding over recent decades is because of human-caused warming and how much is because of natural variability.

What we can say with certainty, however, is that there has been an increasing trend in flooding over the past four or five decades in parts of northern and western Britain, and this is consistent with what we expect in a warming world.

🤔 Do you ever wonder what COP15 really is and why does it matter to you and your business?

💚 Dr Stephanie Wray, RSK Group’s Chief Sustainability Officer and Managing Director of Nature Positive, gives us a clear explanation about why it is essential for the business community to understand the opportunity that is COP15.

Some great pictures from the team at @centara_ltd out on-site surveying with a laser scanner.

🤝 @facaderemedialconsultants' Managing Director has written to Housing Secretary Michael Gove to highlight concerns around new regulations such as the Building Safety Act 2022 and the developers’ pledge – Mr Gove’s bid to reset building safety in England.

Find out what he requested in our bio!

🌍 COP15, the upcoming UN biodiversity summit, aims to set out a plan for how countries will work together to achieve a nature-positive world by 2030.

💡 Join the COP conversation as RSK reports live from COP15!

Register for our free webinar in our bio!

💡 In this insight, Dr Hamish Moir and Peter Downs from @cbec_eco_engineering_uk, an RSK company, explore how sustainable approaches to river management can help protect us from flooding and droughts.

Jiano Pulickal from @structuralsoils took Bertie Bear around the site for the day!

👏 Grace Kassimoto is the only acoustic specialist from and working in East Africa.

💚 In our latest #ADayInTheLife, she discusses how she is leading the way for women in a traditionally male-dominated industry and what she enjoys most about her role.

Read her story in our bio!

📢 We are proud to sponsor the #GreenEnergyAwards 2022, an event organized by Scottish Renewables

🏆 This ceremony aims to recognise the inspirational organisations, people and projects going above and beyond to make a real difference to the health, wealth, and wellbeing of Scotland

We can't wait to see you there!

Amazing pictures from @crcivils taken on-site at A47 Guyhirn.

This website uses cookies to improve your experience while you navigate through the website. Out of these, the cookies that are categorized as necessary are stored on your browser as they are essential for the working of basic functionalities of the website. We also use third-party cookies that help us analyze and understand how you use this website. These cookies will be stored in your browser only with your consent. You also have the option to opt-out of these cookies. But opting out of some of these cookies may affect your browsing experience.
Necessary Always Enabled
Necessary cookies are absolutely essential for the website to function properly. These cookies ensure basic functionalities and security features of the website, anonymously.
Functional
Functional cookies help to perform certain functionalities like sharing the content of the website on social media platforms, collect feedbacks, and other third-party features.
Performance
Performance cookies are used to understand and analyze the key performance indexes of the website which helps in delivering a better user experience for the visitors.
Analytics
Analytical cookies are used to understand how visitors interact with the website. These cookies help provide information on metrics the number of visitors, bounce rate, traffic source, etc.
Advertisement
Advertisement cookies are used to provide visitors with relevant ads and marketing campaigns. These cookies track visitors across websites and collect information to provide customized ads.
Others
Other uncategorized cookies are those that are being analyzed and have not been classified into a category as yet.
SAVE & ACCEPT
Share via
Facebook
Twitter
LinkedIn
Mix
Email
Print
Copy Link
Powered by Social Snap
Copy link
CopyCopied
Powered by Social Snap